My friend Paul Moore purchased a PreSonus AudioBox and was eager to record a song with it. He decided to invite our friend Isaiah Diaz to play something we could record. When I heard about this, I decided that it would be a good idea to join in and shoot a music video with my new green screen. So Paul and I recorded both Isaiah’s song and the music video at the same time. The recording process took 5 hours form setup to tear down. During that time I encouraged Isaiah to write an original song so that our finished products could be used any way without worrying about copyright. As Paul and I set up, Isaiah literally wrote this song on the spot with just a pen and scrap sheet of paper. Paul spent about week with the final audio recording; mastering it with Studio One. When Paul finished, he then sent the final recording over to me via Dropbox. I then dropped it into Final Cut Pro X and produced this music video. 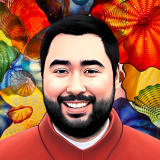